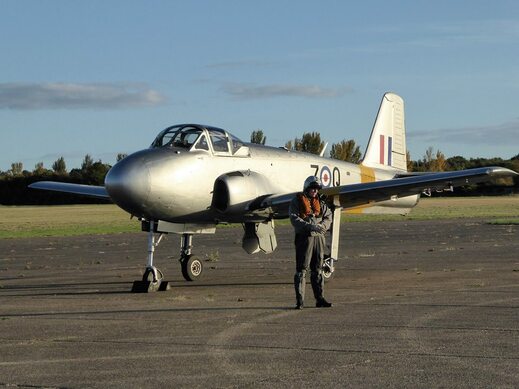 Jet Provost T1
This Year We Look Forward To Celebrating
​the 50th Anniversary of XW324.

In 1951, Hunting Percival began work on the design that would ultimately lead to the Jet Provost. At this time the company was actually in the process of establishing mass production of the Piston Provost basic trainer but was already anticipating that demand for a jet-powered training aircraft would soon be on the horizon. The idea was to produce an aircraft capable of duplicating handling and operating characteristics of the RAF’s operational jet fighters of the era whilst at the same time allowing modest approach and stall speeds and be relatively simple to handle.

During the early design process, hunting decided to use as many of the piston Provosts existing components and subsystems as possible to speed development through to the prototype stage. The initial design work was performed as a private venture by Hunting Percival independent of any service requirement although in March 1953 sponsorship from the British Government was forthcoming as a result of interest shown by the Ministry Of Supply, the Same month saw an order for a service-test quantity of Jet Provosts for evaluation purposes.

On 16 June 1954, the prototype XD674 conducted its first flight from the factory at Luton Airport with Dick Wheldon at the controls. A series of seven flights were flown in quick succession over the following three days. By early November 1954 Hunting Percival’s own test program had amassed a total of 123 flying hours after which the prototype was submitted to the RAF for official trials to be carried out at RAF Boscombe Down. While testing proved the overall performance of the Jet Provost to be satisfactory a number of refinements soon followed.

On 19 February 1955, the first of an order for ten pre-production aircraft, designated Jet Provost T1, performed its first flight.  In May 1955, test trials continued with the Central Flying School to establish the value of the JP as an Ab-initio trainer and to develop a training syllabus. During the second stage of CFS trials actual students were introduced to the type for practical evaluation purposes. The CFS examiners concluded that the JP had noticeably improved the performance of the students during its trial deployment.

Improvements continued and the T2 soon gave way to the T3, T4 and subsequently the pressurised and air conditioned T5. The T5 was then armed and sold to foreign air arms as the T51 & T55 as a low level light attack aircraft, these aircraft were soon superseded by the BAC 167 Strikemaster which was to be the final incarnation of this venerable type. The Strikemaster was extremely successful and was exported to many developing countries, the BAC 167 never saw RAF service save for evaluation and testing.

The Jet Provost served the RAF for almost 40 years, a great achievement in its own right. There are currently 8 airworthy Jet Provosts in the UK with a number currently mothballed for possible future restoration to flight status, the UK’s current airworthy fleet as at 30th Jan 2020 consists of the following airframes:

XW324 was built at Warton as the 38th Jet Provost T.5. She was accepted by the RAF in September 1970 entering service with 3FTS at RAF Leeming and coded '38'. During her tenure at Leeming she was used for basic pilot training and was also used by the School's aerobatics team 'The Gemini Pair' during 1973.

In 1974 she was transferred onto the strength of 1 FTS at RAF Linton-on-Ouse and again used for basic pilot training. 324 only remained at Linton for approximately one year as she was not selected for upgrade to T5a status. It has recently been discovered that 324 also flew with the Swords Display team during the 1974 display season piloted by Mike Fox in the number 3 position.

In late 1975 she was again transferred, this time onto the strength of 6FTS at RAF Finningley as ‘aircraft U’ where she was used for both navigation and low level air defence (LLAD) training tasks. Whilst at Finningley she had tip tanks fitted to facilitate the longer sortie profiles needed by the navigation unit for their extended cross country navigation exercises. XW324 remained at RAF Finningley for the rest of her service career and was eventually retired and ferried to RAF Shawbury on the 21st July 1993.

In February 1994, XW324 was one of 65 Jet Provost aircraft acquired by Global Aviation. They were slowly ferried to their new home & 324 arrived on 23rd April 1995 & was allocated the civil registration G-BWSG. Following restoration to flying condition she was moved to Humberside & was put up for sale, She was subsequently purchased and relocated to Southend where she operated until resold in 2000.

In August 2000, she moved albeit temporarily to North Weald, finally making Jersey her new home, she did however remain a regular attendee at UK air shows. At the end of the 2006 air show season XW324 moved back in to the hangar at Hawarden where she become a ‘Hangar Queen’ for around a year. She was notably absent throughout the 2007 season and was eventually put up for sale. Negotiations for her sale began in September 2007 and an agreement was soon reached, 324 was officially purchased by the current owner Jeff Bell on the 16th September 2007.

Following her sale, negotiations began to bring XW324 back to an airworthy status and a scope of work was agreed with North Wales Military Aviation Services to carry out the necessary work. In addition to the servicing requirements XW324’s brakes were upgraded to those used on the Strikemaster, her wings were removed and the upper lug attachments were non-destructively tested (NDT’d) in accordance with the outstanding mandatory permit directive (MPD). Testing was completed successfully and the non-aerobatic flight and G restrictions were lifted effectively allowing 324 to fly to the limits as advertised in the RAF JP Mk5 pilots notes. 324 was ferried to East Midlands Airport on the 25th May 2008 where she remains to this day.

Since late 2007, XW324 has received continuous refurbishment work to bring her to a condition as close as possible (without a total rebuild) to that when she rolled off the production line in 1970.

Externally, attention has been paid to areas of the airframe which required only very minor cosmetic paint repair, all decals and placards have been replaced and we have returned 324’s decals/livery accurate to her time with 6FTS at RAF Finningley.

324’s canopy has recently been replaced and the plexi-glass is now crystal clear and adds further to her overall pristine appearance.

The ejector seats in XW324 are kept serviceable and these too have been refurbished to an “as new” condition. The now time expired parachutes, harnesses and the old upholstery have all been replaced thus completing the entire cockpit restoration. 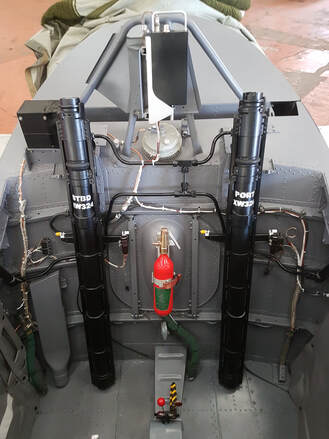