Please note: display sequences may be varied to account for venue, controlled airspace, cloud base, visibility and lack of discernible horizon. 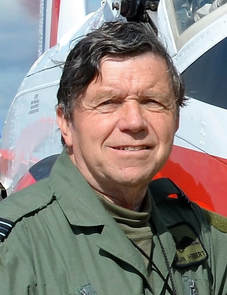 After attending Officer and aircrew selection at RAF Hornchurch, he went straight from school to RAF College Cranwell, where he did his basic flying training on Jet Provosts 3&4s. Then multi engine advanced training followed by posting to first C 130 squadron (36). This was followed a tour as pilot leader at 6 FTS RAF Finningley ( on Varsities) and then to RAF Northolt on Devons as VIP pilot.

On completion of service , he spent next 25 years in Automotive,Aerospace and Transport sectors culminating in running a £340 mill Aerospace company. Instead of retiring, he rejoined the RAF at RAF Woodvale. After completing CFS ,instructed on 10 AEF, Manchester & Salford as well as Liverpool UAS's where he accrued 2,500 hours in Grob Tutor.

Now instructs at RAF Flying Clubs based at Waddington, Scampton and Barkston Heath teaching PPL/LAPL, aerobatics, tailwheel and IMC/IR(R) as well as flying XW324 during the air show season and being our Chief Pilot. 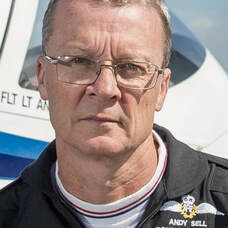 Andy was born in Oxford and joined the RAF in 1984. Following a tour in the RAF Regiment, he started flying training in March 1988 after which he was posted to 30 Sqn at RAF Lyneham to fly the Hercules.

He became a Qualified Flying Instructor in 1993 flying the Bulldog with Queens University Air Squadron before completing a further tour on 24 Sqn back at RAF Lyneham.

In 1999 Andy joined 55(R) Sqn at RAF Cranwell and completed two tours as a Dominie QFI and Rear Crew Instructor. During this time he gained his first experience of display flying completing five seasons as Captain on the Lancaster and Dakota with the Battle of Britain Memorial Flight.

His final tour in the RAF was on the Standards Flight of 115 Sqn, flying the Tutor, training and standardising elementary QFIs and completing the 2018 season as the Tutor Display Pilot.

He holds an ATPL with an FI rating and has flown over 12000 hours. 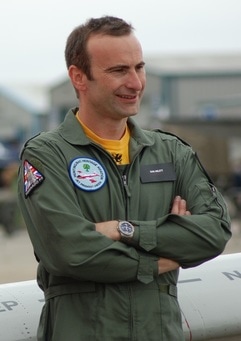 Dan was born and raised in South Oxfordshire (schooled at Gillotts Secondary and Henley VI Form College), qualifying for his PPL in 1992 but really learning to fly with the University of London Air Squadron at RAF Benson between 1993 and 1995 where he picked up his passion for aerobatics.

Dan joined the RAF as a commissioned officer in 1997 and was streamed fast-jet.  After completing training, he flew the Tornado F3 from 2000 to 2004 with No 11 (Fighter) Squadron and again from 2007 to 2011 with No 111 ‘Treble-One’ (Fighter) Squadron.  He flew operational missions over Iraq, Falklands and on Quick Reaction Alert (QRA).  He has intercepted numerous Russian Strategic Bombers – Bears and Blackjacks - which were testing UK defences and has interrogated 'rogue' airliners.  ln 2008 he was a Tornado F3 RAF Role Demo Display pilot and performed as the solo display pilot both in that year and in 2010. He was promoted to squadron leader in 2009 and appointed as the ‘Trapper’ - Officer Commanding Standards and Evaluation - for the Tornado F3 until its retirement in 2011.

In between operational front-line tours, he was a flight instructor on the Hawk T1 where he flew over 400 hours a year and picked up the nickname (or callsign) ‘Crazy Dan’. Dan was most recently Officer Commanding Advanced Flight Training on the Hawk T1 at RAF Valley until early 2015. Dan is now an 'aggressor' pilot flying Red Air as front-line support with No 100 Squadron.

Civil flying wise, Dan has an ATPL and is an EASA examiner on small aeroplanes. He has been flying and displaying vintage jets since 2005.  He is qualified to  fly Strikemasters, Jet Provosts and the Russian L29s & L39s. He was also one of the members of Team Viper from 2010 to 2012 flying the beautifully iconic Hawker Hunter. 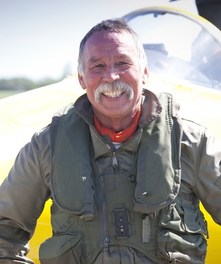 Squadron Leader (retired) Chris Heames joined the RAF from school in 1970. After Officer training, he was posted to RAF Wattisham, RAF Akrotiri and RAF Brawdy as an air traffic controller.

In 1979, Chris began his pilot training at RAF Linton-on-Ouse in Lincolnshire on the Jet Provost and subsequently at RAF Valley and RAF Chivenor on the Bae Hawk. He then went to RAF Binbrook and converted onto the English Electric Lightning, followed by a further conversion course onto the McDonnell/Douglas Phantom with 19 Sqn at RAF Wildenrath in Germany.

Chris then served with 17 and 14 Sqn in RAFG at Bruggen after a conversion onto the Tornado GR1, returning to the UK as an instructor with TTTE at RAF Cottesmore. Following QFI training on the Tucano at Linton-on-Ouse, Chris then went through a further conversion onto the Tornado F3. Short tours on 5 and 11 Squadron flying the Tornado F3 were followed by a year at CFS Tutor Sqn Cranwell as a QPNI flight commander.
​
He currently has approximately 13500 total flying hours of which 6000 are on fast jets. His experience spans a diverse array of aircraft from including Tucano, Yak, Gnat, Hunter, Tornado, Lightning, Phantom and L29, Avro Tutor, Tiger Moth, Chipmunk and Bulldog. 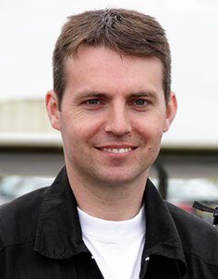 Originally trained as an electronics engineer at GEC-Marconi, Jon started his training as a Private Pilot in 1995 then moved to Coventry starting a pilot cadet scheme with Air Atlantique, to become a commercial pilot. Once qualified, he moved on to the aerial reconnaissance sector of the company flying Cessna twins, before being streamlined into the turbo-prop fleet for freight and VIP passengers on the Fairchild Metroliner.

The company was gradually building up its own collection of classic aircraft, and in 2005 Jon became the Chief Pilot for Atlantic Reconnaissance and for ‘Classic Flight’, eventually being qualified on most of the aircraft they operate, as a display pilot, instructor and examiner.

Types flown range from the Auster, Chipmunk, Proctor and Prentice, on to twin engine Rapides, Dove, Avro Anson, Pembroke, Twin Pioneer and DC-3, and even on ex-military jets such as Jet Provost, Vampire, Venom and Gloster Meteor. Outside of Air Atlantique he has also qualified on the Howard 500, Beech 18, Grumman Widgeon and Albatross, T-6 Harvard and Strikemaster. Although not flying, Jon became involved in taxiing the Avro Lancaster, Shackleton and Douglas DC-6.

Jon has moved into the corporate aircraft sector flying Citation business jets around Europe and the brand new HondaJet, whilst still being involved in other classic aircraft in his spare time as a display pilot and instructor. 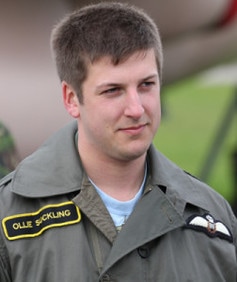 ​Ollie Suckling
Flying XN367 as part of the pairs display

After IOT he carried out EFT on the Tutor at Cranwell was streamed Fast Jet and flew the Tucano at Linton on Ouse before completing Advanced flying training and Tac weapons on the Hawk T1. Post Valley he started the Tornado OCU in January 2013, before being posted to RAF Marham in 2014.

Having a true passion for aviation and having worked on historic aircraft such as Victor ‘Lusty Lindy’ at Elvington since he was 15, he was always keen to get into the classic aircraft scene. Ollie bought the share in the JP XN367 in 2014 and has worked hard in order to attain his Display Authorisation in short order. He also drives the Buccaneers at Bruntingthorpe and is a proud member of The Buccaneer Aviation Group.